The Eiffel tower in Paris was built in a little more than 2 years. The Sagrada Família church in Barcelona was started 100 years ago and it is still being built. What is the difference between these 2 giant projects? Is one an example of success, and the other of failure? And how are they related to Agile project management? The construction of the Eiffel Tower started in 1887 and was completed in 1889 – two years and two months later. At the time, it was the tallest building in the world. Around 450 people were involved in the construction, with 150 in the metal factory and up to 300 on site. The tower was built with a very clear delivery date and was ready in time for the inauguration of the World Expo in 1889.

The construction of the Sagrada Familia started in 1882, and is still in process. The base was built when its designer, Gaudi, was still alive. The first 4 towers where constructed after his death in 1926. Long periods of construction were put on hold, and rework led into the 21st century. Construction is still going on today, based on the original plans.

“What is the difference between these 2 giant projects? Is it an example of success and failure? And how it is related to Agile project management?”

The Importance of Clear Planning

Before diving into the differences between these two projects, we should note that what they do have in common is an incredible planning process. In the case of the Eiffel tower, this was a very detailed engineering plan, documented with many drawings down to the smallest detail. The engineers produced 5300 blueprints and detailed notes about the construction of the tower before starting the actual construction.

In the case of the Sagrada Família, this is about its unique design. The instructions left by Gaudi were so detailed that 100 years after his death, the church is still being constructed according to the original design vision.

The importance of thorough planning and detailed design is clear to any experienced project manager. However, many times the planning process is considered to be something pre-project – and itself lacks proper project management. Mistakenly, the project is triggered when the planning is completed. Both of these huge projects illustrate how important it is to include a planning phase in the project plan and to define a milestone to start execution. This rule goes from huge engineering projects to simple logistical projects to development. Consider pushing out your first line of code and spend some more time on UX, UI and user research.

“Many times the planning process is considered to be something pre-project – and itself lacks proper project management. Mistakenly, the project is triggered when the planning is completed.”

The amazing speed of the Eiffel tower construction, which was the tallest building in the world at the time, is really impressive. This success is partially attributed to the planning.

Being built of metal, prompt delivery of the huge metal parts was a critical coordination item in the project plan. While such complicated coordination can turn out to be the project’s critical path and drive significant amount of risk, the Eiffel constructors managed to remove it off the risk table completely. The metal parts were provided by a factory owned by the construction company – and therefore,  dedicated to this project. A process was defined to eliminate this risk factor by turning these 2 critical factors – manufacturing and construction – into one.

Agile: Being Successful Throughout the Journey

While the Eiffel tower rose quickly into the sky, Sagrada Família was extremely slow – and it is still being built. Only 8 out of 12 towers are complete and the work is not expected to end any time soon. But, as you probably know, Sagrada Família is open, attracting millions of visitors every year while being completed. Sounds familiar?

The first principle in the Agile project management manifesto defined the approach to “satisfy the customer through early and continuous delivery”. It took a lot of time to convince people that partial delivery or “continuous delivery” is not wrong. Actually, it has proven to be as powerful as a full delivery. Sometimes so powerful that full delivery never actually happens and the final destination keeps moving.

Sagrada Família is an amazing example of continuous delivery that drives success. Its partially built form is as powerful, interesting, beautiful, and eye catching as it can be. In a way, having the entire building out there is not very important and Barcelona may never get there. It’s all about the journey, right? That is agile, in a nutshell.

The case of Sagrada Família shows the difference between project success and project delivery. We are used to attaching them together automatically, but sometimes it is simply not the case. Is the final form of your app required for success? Sometimes users are just happy to see the value flying in! so Agile project management was not invented recently, it was just defined as an approach; it has actually been there all the time, at least since 1882, when construction of the church started. Continuous delivery since 1882 – that has a nice ring to it.

“ It took a lot of time to convince people that partial delivery or “continuous delivery” is not wrong. Actually, it has proven to be as powerful as a full delivery. Sometimes so powerful that full delivery never actually happens”

The Importance of Risk Assessment to Efficient Operation

Back to Paris. The Eiffel tower was the tallest in the world for some time, until being beaten by the Chrysler Building in New York in 1930. Building to such a great height created not only engineering challenges, but also risk challenges. Construction workers were not used to working at such heights.

To deal with the risk, the engineers of the Eiffel tower came up with several levels of risk management, from handling vertigo to the risk of falling parts. The risk management was so successful, that no casualties were recorded during construction – a pretty rare case for the time, even for a single floor building.

Taking risk seriously paid off – literally – when the workers tried to incorporate to ask for improved terms. They claimed they should get a risk factor reward, but the claim didn’t hold up – since no risk issues occurred.

Defining certain activities as risky is not that hard, especially when managing a project in ones’ area of expertise – you just know when and where to expect the risk. However, risk prevention is far more tricky. What needs to be done to avoid the obvious risk of going that high?

“Taking risk seriously paid off – literally – when the workers tried to incorporate to ask for improved terms. They claimed they should get a risk factor reward, but the claim didn’t hold up[ since no risk issues occurred.”

Agile vs. Traditional: What Is Your Project’s Focus?

Complicated design, irrational pattern, multiple ideas and approaches, within the same construction. This is the Sagrada Família: a process with no end, amazingly complicated and which creates various construction challenges, though also a breathtaking piece of art that can be looked for hours. This is agile.

The implications of being on one of these sides are clear. It is not about good and bad, it is about a very different project strategies. As project managers we need to understand the implications of such differences – what does it mean to use additional technology? How can we repeat the same operational patterns? Do we really need another level of complexity? Traditional project management is ordered and planned. Agile is about incorporating the chaos, instead of avoiding it. 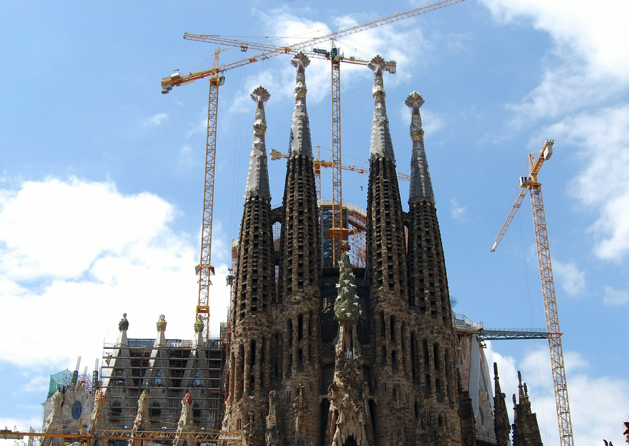 Is the Eiffel Tower an amazing project? Of course it is. Is Sagrada Família a project failure? Absolutely not. They just had very different approaches to the project journey – and as a result, different scopes, ideas and objectives. As project managers, you are living somewhere between the Eiffel Tower and the Sagrada Família. What are your objectives? Reaching the sky in a well-focused and operationally optimized project? Or reach an amazing breakthrough by delivering it in pieces? You know the answer, based on your project – and you as project manager need to pick the right journey. Agile? Or traditional? Only you know for sure.